One of Our Own, Shagun Mehra Joins Hands with Spanish Chef, Xavier Pellicer in Barcelona

ShagunMehra, an Indian Celebrity Chef, a director at Grand Mercure Vadodara Surya Palace and the Director of Gastronomy at the luxury award winning resort Coco Shambala in Goa has a story that will leave you in awe.

Here’s sharing with you her story of how having taken the baton from her father, Mr. Piyush Shah, her love for food has only soared to new heights!

Let’s Find out How Her Culinary Journey Began! 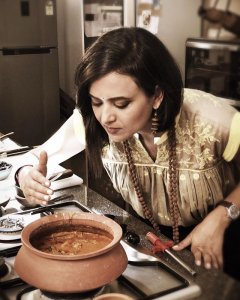 Shagun was exposed to our kitchens at Surya Palace ever since she was a young girl. At the age of 15 was when she learned to cook and spent a lot of time learning simple recipes from her mother’s kitchen and by being around Surya Palace with her father, Mr. Piyush Shah. At that time, one of our kitchen staff, Mr. Pradeep Chavan was sponsored by Shagun’s father to specialise and train in Mediterranean food from the chefs in Europe.

After Mr. Chavan came back to work with us, he brought back a lot of Mediterranean recipes with him that has been incorporated into the menu at Surya Palace. He also taught Shagun a few basic recipes that she picked up fast and enjoyed creating. This was her foundation of learning how to cook Mediterranean food and since then, she has been constantly experimenting.

To take her love for international cuisines to the next level, she officially trained in hospitality at Switzerland’s renowned Ecole Les Roches, and fine-tuned her culinary skills at Paris’ Le Cordon Bleu.

Shagun believes Les Roches gave her the skills she required to succeed in a challenging industry. The “experience of being in an international school” taught her a lot of skills. There were students from around the world and she made friends with some great people from Mauritius, China, France and other places. “The cross-culture influence of language, food, and lifestyle” was a profoundly enriching experience for her.

From there, she went on to work at The Zodiac Grill at the Taj Palace.

She also co-founded the first accredited wine school in India. Wine she says was her first love, alongside food.

She is a celebrity chef featured in several cooking shows and has also judged a cooking show on television.

Shagun currently is the director of cuisine at Goa’s Coco Shambhala. She also loves to host exquisite multi-course dinners for private parties at her Portuguese home. Shagun often does pop-up dinners that are not to be missed and loves to do small batch themed cooking sessions to share her culinary skills.

Shagun will be joining hands in a 4-hands meal in Barcelona on April 29th with renowned Spanish Chef Xavier Pellicer.

Dinner guests will be able to sample an exquisite tasting menu that fuses Indian and Mediterranean flavours and will include dishes such as “Indialuza” squid with saffron mayonnaise, and seafood with basmati rice and curry aromas.

“Pellicer’s Locale”, which was named the Best Vegetable Restaurant in the World, focuses heavily on using healthy, organic products sourced locally. This is what excites Shagun as her own food philosophy aligns with this. Pellicer’s biodynamic style of cooking includes the belief that the people who grow food, give positive energy to those products, which is then transmitted to the chef, and finally to the customer!

Shagun is absolutely thrilled about her trip to Spain and she said, “2019 is going to be a year I will remember for the rest of my life”. All the excitement is causing her lack of sleep!

Her trip will be divided into 2 parts:

“The higher you keep your goal, the higher you reach. Believe in your dreams, back yourself because nothing is unachievable!”